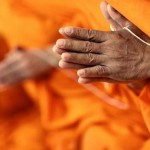 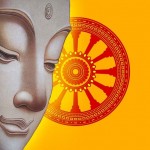 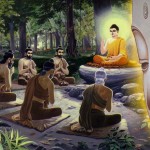 Morning Prayers are an essential part of Buddhist practice and along with the Evening Prayer combine to provide Thai Theravada Buddhists with a way of both clearing their Negative or Unskilful Acts of the Past, and to develop Future Auspicious Causes of Enlightenment. This Page is intended to Assist Foreign Lay Practitioners, and Potential Candidates for Ordination into the Sangha, to be able to open a Path of Access to the correct method of Chanting Thai Buddhist Morning Prayers, with a correct Understanding of what those prayers mean. Even in Thailand, many Temples are beginning to Chant in both Pali and Thai, because it has become ever more recognized that the benefits of Prayer Chanting are truly at their Utmost when the person Chanting actually Understands the Meaning of what they are saying.

(To him; the Blessed One, the Accomplished One, the Supremely Self-enlightened One, having extinguished all the flames of desires and becomes rightly enlightened through His own efforts,)

(To the teachings of the Blessed One which are well-expounded,)

(And to the disciples of the Blessed One who are well-practiced,)

(We worship the Blessed One, His teachings and His disciples,)

(With these proper offerings, to render supreme homage.)

(It is beneficial for us that the Blessed One, having passed away for long but leaving the great benefits behind.)

(The Blessed One has great compassion to us who are the later generation.)

(May the Blessed One accepts these offerings of ours,)

(I pay homage to the Buddha, the Awakened and the Blossomed One who is well knowledgeable.)

(The teachings of the Buddha are well-expounded.)

(I salute those teachings of the Buddha with joined palms.)

(The disciples of the Buddha have practiced well.)

(I bow down with respect to them.)

(Now let us pay preliminary homage to the Buddha)

(Homage to Him, the Blessed One,)

(The Supremely Self-enlightened One.)

(Now let us chant in praise of the Buddha)

(He who is the Truth-winner, Having attained Nibbaana, The Supremely Self-enlightened One)

(The Perfect Embodiment of Wisdom and Virtue,)

(the Knower of all realms,)

(The Incomparable Tamer of individuals,)

(The Supreeme Master of devas and men,)

(The Awakened One who is Knowledgeable, self-awakened and blossoming by virtue of the Dhamma)

(The Analyst who knows how to teach Dhamma selectively.)

(Any Buddha at all, is one who, With His own most supreme wisdom, shows explicitly the extinguishing of suffering and has taught the world, together with the devas, the maaras, the brahmas, and all groups of living beings including monks and all other human beings so that they all know accordingly the truth about suffering. )

(So is Dhamma thus explained by any one of the Exalted Ones.

So fine indeed it sounds in the beginnings,)

(Fine it is in the middle,)

(For it proclaims, by the title and explanation so given, a holy life which consists of a most sublime, pure and perfect way of practice. )

(prostrate and recollect the virtues of the Buddha)

(Now let us chant in praise of the Dhamma.)

(The Dhamma is well-expounded by the Exalted One.)

(It is something which one who learns and truly practice will realize by one’s own self.)

(It is also something which can be actually practiced and yields results without the limitation of time.)

(It is also something worthy of telling the others to take heed of.)

(And it is something ought to be respectfully observed and adopted.)

(As it is something that can be only realized through personal experience. )

(To that Dhamma, I pay the highest respect.)

(To that Dhamma, I Bow my head down with respect.)

(prostrate and recollect the virtues of the Dhamma.)

(Now let us chant in praise of the Sangha.)

(Of good conduct is the community of noble disciples of the Exalted One.)

(Of upright conduct is the community of noble disciples of the Exalted One.)

(Of right conduct is the community of noble disciples of the Exalted One, who practice in order to know well the Dhamma which frees one from suffering.)

(Of proper conduct is this community of noble disciples of the Exalted One.)

(The noble disciples of the Exalted One are such people namely,)

(The four pairs of men, the eight of individuals. )

(The community of noble disciples of the Exalted One is:)

(Worthy of reverential salutation, and)

(Worthy of the incomparable field of merit for the world.)

(To that Sangha, I pay the highest respect.)

(To that Sangha, I bow my head down with respect.)

(prostrate and recollect the virtues of the Sangha)

(Now let us chant our salutation to the Triple Gem together with the pali passages conducive to spiritual urgency.)

(The Buddha who is pure-minded, has an ocean-deep compassion.)

(The Buddha who is pure-minded, has an ocean-deep compassion)

(And is one who puts into extinction all evils and all defilements of the world.)

(I join my palms in the gesture of devoted respect to the Bhddha.)

(The Dhamma of the teacher, glows brightly like a lamp.)

(It is divided into Path, Fruit and Nibbaana)

(Which itself transcends the world and shows the way to transcendence.)

(I join my palms in the gesture of devoted respect to the Dhamma.)

(The Sangha is the greatest of all fields of merits.)

(For it is they who, having attained Nibbaana, become awakened just as the Exalted One has done.)

(It is they who abandon their defilements of all sorts and become the noble ones with wisdom.)

(I join my palms in the gesture of devoted respect to the Sangha.)

(May any meritorious deeds have I performed in honoring the Triple Gem, which is worthy of veneration, be the power through which all obstacles disappear.)

(The Accomplished One has arisen in this world.)

(He is one distancing himself from all defilements and becomes Self-entightened.)

(And the Dhamma so expounded, is the means to lift one out of suffering.)

(It is the extinguisher of all cravings, thus paving the path to Nibbaana.)

(Thus it leads to true knowledge as proclaimed by the Exalted One,)

(Having heard the teaching, we then perceive this:)

(Association with the unpleasant is suffering.)

(Dissociation from the pleasant is suffering.)

(Not to receive what one desires is suffering.)

(In brief the five aggregates of grasping is suffering.)

(Which are as follows:)

(The aggregate forming the basis of clinging is corporeality.)

(The aggregate forming the basis of clinging is sensation)

(the aggregate forming the basis of clinging is perception.)

(All these are meant to be understood by Buddhist disciples.)

(The Exalted One, during His lifetime,)

( Frequently instructs His disciples in just this way.)

(The teachings of the Exalted One are mainly meant for his disciples and are presented as this:)

(All conditioned things are impermanent,)

(All of us are subjected to: Birth, Decay and death, Sorrow, Lamentation, physical sickness, mental sickness and despair.)

(We are being fathomed by suffering.)

(Suffering is what we have in the foremost.)

(How can the way of ending this suffering be mad known clearly to us?)

(We all have reached the Exalted One for our refuge though He passed away a long time ago.)

(Having reached the Dhamma and the Sangha,)

(We will bear that in mind and practice accordingly the teachings of the Exalted One in so far as our mindfulness and strength will permit us.)

(Bring about the extinction of all sufferings.)

For Monks and Novices to Recite

(We all devote ourselves to the)

(Accomplisged One who is distancing Himself from all defilements and becomes Self-enlightened, though He passed away a long time ago.)

(We have gone forth with faith from home to timelessness,)

(Following the Blessed One to practice the holy life,)

(Being fully equipped with the monk’s training rules and livelihood.)

(May this holy life leads us to the end of this whole mass of suffering.)

(Now let us recite the verses on the transference of merit to the devas.)

(Those devas who dwell in the monastery, in the stupa, in the bodhi tree,)

(Those devas we have worshipped with the gift of the Dhamma. May they bring happiness to this monastic area.)

(those who are laymen, laywomen of good breeding and monastic dwellers,)

(All householders, villagers, foreigners, countrymen and those who are chieftains,)

(may they be happy. All living beings, whether womb-born, egg-born,)

(May they have the sublime Dhamma leading them beyond the wheel of suffering;)

(may it bring them to an end of suffering.)

(May the Dhamma of the righteous men last long.)

(May people who observe the Dhamma be long-lived.)

(May the monks be harmonized and be ready to bring about suitable things and benefits.)

(May the true Dhamma protect us and protect those who observe the Dhamma.)

(May we all be endowed with the prosperity in Dhamma with the noble one has proclaimed.)

(May the rain come in the right season.)

(May the rain bring success to the earth for the prosperity of all living beings.)

(Just as a mother and a father regularly shield their own child who was born from them,)

(May the King administer hid people with the royal virtues forever.)

Document is published by www.dharmathai.com for free Distribution Only and is not permitted to be Sold

Editing without Permission or removal of Credits is not Permitted

The aim of the book was to enable Foreigners to be able to Chant Buddhist Prayers when attending Thai Theravada Buddhist Practice Centers and Temples, both in and outside of Thailand