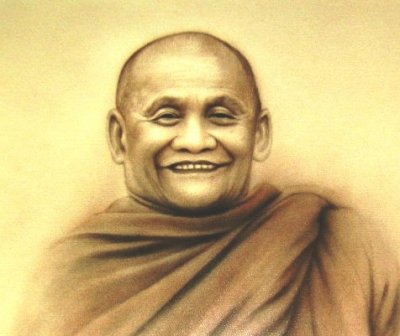 Ajahn Chah Supatto – His Wisdom is endless – click image to read a Quote on Seeking Peace from the Master of Teaching Dhamma, with Simplicity.

“The Contemplation of Rupa and Nama Dhammas leads to Intuitive Understanding (Insight) of the True Nature, or Essence of all Phenomaena (Dhammas) namely, that they are empty (Sunyatta) – empty of an owner or governing body, that is unchanging (Anatta), Impermanent due to constant change (Anijja), and lead to Eventual Dissatisfaction due to Impermanence (Dhukkha).  And that all of this, worldly existential soup of phenomaena, is a mass of blubber known as ‘Sangkhara’. And that only that which is not any of those Sangkharas, is Nibbana”.

“Nibbana is not so far away, in fact, it is ever present, but our minds are unable to experience it because of the Dhamma of the veils.. the Dhamma of illusory perception and the Dhamma of assumption”

The Dhamma is Ultimate truth, but even such a thing as ‘A Lie’ is a Dhamma, for Dhamma are Phenomaena, and ‘The Dhamma’ as meant by Humans, is the word used to refer to ‘Ultimate, Absolute, Eternal Truth’

I hope you now have a deeper understanding of the word Dhamma. (Words are ‘Nama Dhammas’ – Mental Objects, Forms are ‘Rupa Dhammas’ – Physical Objects).

Download this Other Excellent Free ebook by Ajahn Chah 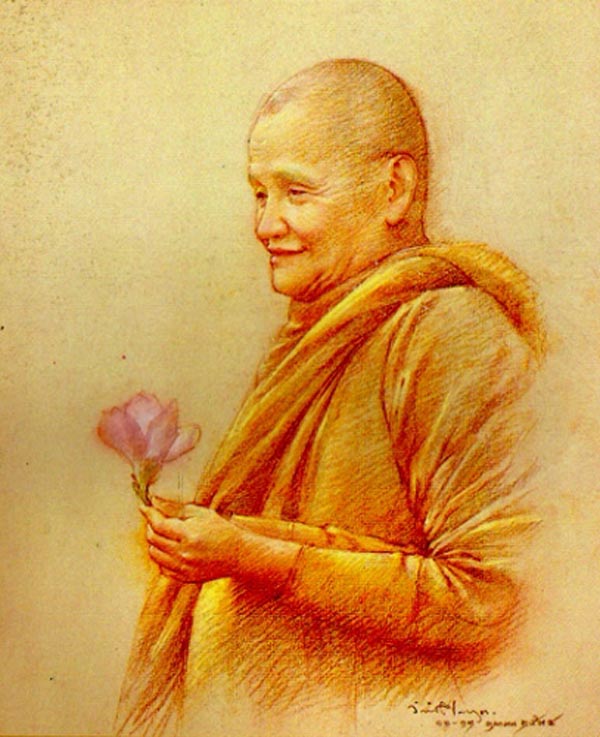 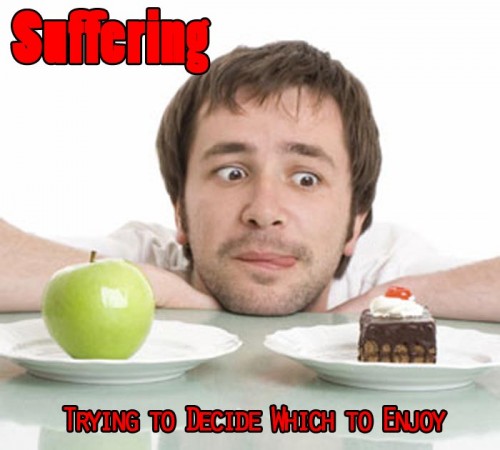 We want to take the easy way, but if there’s no suffering, there’s no wisdom. To be ripe for wisdom, you must really break down and cry in your practice at least three times. 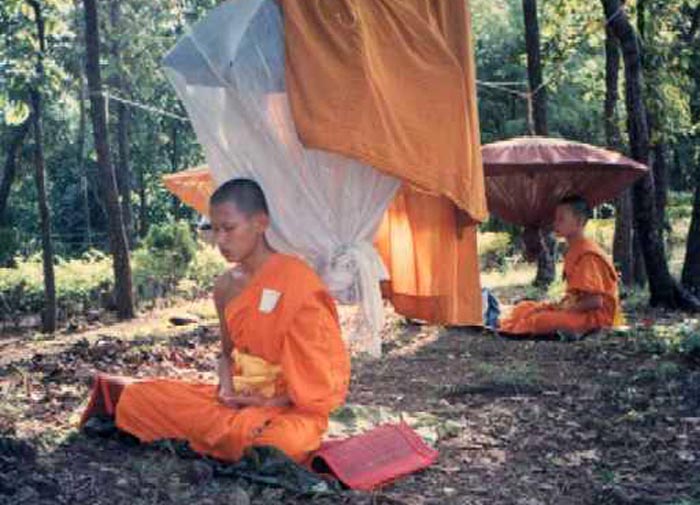 We don’t become monks or nuns to eat well, sleep and he very comfortable, but to know, suffering:

How to accept it…

How not to cause it…

So don’t do that which causes suffering, like indulging in greed, or it will never leave you. 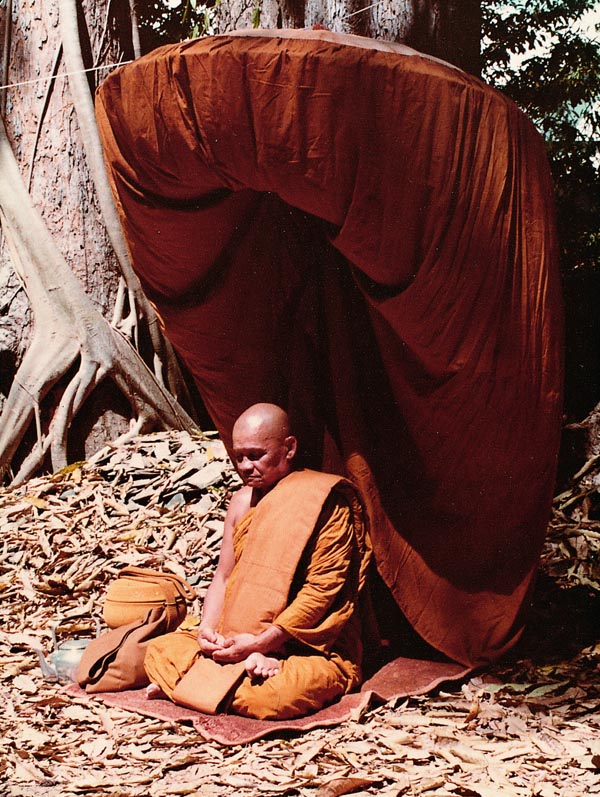 In truth, happiness is suffering in disguise but in such a subtle form that you don’t see it. If you cling to happiness, it the same as clinging to suffering, but you don’t realize it. When you hold onto happiness, it’s impossible to throw away the inherent suffering. They’re inseparable like that. Thus the Buddha taught us to know suffering, see it as the inherent harm in happiness, to see them as equal. So be careful! When happiness arises, don’t be overjoyed, and don’t get carried away. When suffering comes, don’t despair, don’t lose yourself in it. See that they have the same equal value.

When suffering arises, understand that there is no one to accept it. If you think suffering is yours, happiness is yours, you will not be able to find peace.

Clinging to Suffering by Seeking Relief

It is important to contemplate in Meditation, the Impermanent Nature of all things, including non-physical things such as feelings and thoughts, be they pleasurable or unpleasurable. The Contemplation and Attainment of deep insights about Impermanence will cause the Insight into the other two factors of the Dhamma (Existence, namely, Dhukkha (Unsatisfactoriness) and Anatta (Non-Permanent-Self-Nature)
The Problem with our wrong understanding of how things are, causes us to see relief from suffering by seeking escape by absorbing our self in Worldly pleasures. These Pleasures do of course bring some kind of Joy, but they are temporary pleasures which fade, and leave one longing for more, or a repeat of the pleasurable experience. So when we feel bored, or lonely, it is because we miss the excitement of the party, the company of friends, etc. The company of friends and the excitement of the party, are both pleasures which are temporary. The suffering arises from the empty hole left by the absence of the pleasure which has faded (due to its impermanent nature).

This is precisely how tobacco addiction happens. The relief from the smoke makes the suffering seem to disappear. In fact, it hasn’t disappeared at all, it has just been smothered with some pleasure which makes it harder to notices its presence. Once the impermanent rush of pleasure has faded, we may feel fulfilled for a while, but slowly, the inclination (Craving) to repeat the relieving experience returns, and we become pulled along by the Craving. This cycle of fulfillment, craving and seeking fulfillment again, is the process of two of the chains in the Paticcasammupphada (wheel of dependent origination), which are called ‘Danha and Upadhana’ (Craving and Addiction). We become conditioned to this and thus become chained to the cause and effects of suffering, in a never ending wheel.

This is also a large part of what causes our Endless Rebirths in Samsara. To contemplate and attain insights into these causes of suffering within us, and to realize with Insight, that these pleasures are true causes of Suffering, then we shall slowly develop a turning away from such illusory pleasures, and be able to renounce them with Wisdom.

Becoming a Monk or Nun means to make a Vow before Buddha, which is in Truth a Vow Unto Your Self. Whether you become a Monk or a Nun by Ceremony, is nothing to do with Whether You will Truly practice or Not. The True Applied Practice comes from Inner Effort with oneself, requiring Self Honesty and Diligence. This Road of Self Development can be practiced by Any Person who has arrived at the point of needing to begin this Practice. If you have Seen and Agreed that all thinbgs are Anijja Dhukkha and Anatta (Impermanent, lead to Unsatisfactoriness and have no Inherent Unchanging Self), and you Find the World a simple Trap, and Unescapable Predicament of Suffering, and wish to Attain the Paths and Fruits of the Noble Ones (train to become disattached from all worldly attachments and indulgences), then ordination as a Monk or Nun would be perhaps advisable. But if you have not applied Diligent and Intensive practice as a Layperson and got results, then it is not Advisable to ordain before this has been done. In Truth, the Ordained Sangha is just the ‘Sommutti sangha’ and the True ‘Sangha’ means those who have entered the Paths or Fruits of the Noble Ones (Sotapanna, Sakitakami, Anakami, Arahant). One does not need to ordain to become a Noble One, nor does one need to ordain to Practice or Keep precepts.

If you wish to practice, most Practices except those which are already of a very High Level of Advancement, can ve applied as a Lay person. It was never intended to say that only Monks or Nuns can become Enlightened, rather that the ordained Life is for those who wish to (and are strong enough to) Renounce the World Completely. if you think you will need Family Ties, facebook, Internet and the like,then you are not truly Renouncing. Many Ordained Members of the Sangha do not renmounce anything more than Lay Persons in many ways. Monks these days are seen to use Computers, Internet, Build Schools, Hold Dhamma Courses etc. These are all Auspicious Actions, but they are worldly actions, and still involved in Clinging to the World. This kind of Ordained Person has less chance to Attain Liberation by Practice, for they may spend most of their time occupied with daily tasks and chores that are very much Worldly, such as organizing courses, printing and typing, administrating.. Merits are accumulated slowly, and more merit than a normal person helping the world is attained because of the keeping of the Ordained precepts. The Buddha However, did not say that Sila (Precepts keeping) was a cause of Enlightenment, nor did he say that Samadhi (Concentration) was the direct cause. he named the third quality of Panya (Insight Wisdom and Intelligence) as the true cause of Awakening. The only way to Awaken is to learn to see the Dhamma and Awaken to it, in conjunction with developing the strengths and qualities necessary to have enough effort and will to overcome the obstacles and temptations of the Kilesa (defiled Instincts).

When Insight is Attained into the Non Permanent States which arise within the Mind, it becomes apparent, that although there is a constant seeming awareness (of a Self?, this being what we think is the Self?) present, that awareness is never the same in any two given moments. Because of this constant flux in the condition of the state of awareness, the perceptions we recieve, the moods, feelings and reactions which arise from our contact with the various phenomena, people, events, sensations, cravings and expectations which arise, we become convinced that this conglomeration of things is indeed our true Self.There is no permanently unchangingquality or character that resides within Our Awarenesses, and this is of course what is meant by ‘Non-Self’.

Once we have Intuitively Understood the meaning of Non-Self, we can then begin to accurately conclude in Meditative Contemplation, that there is no Self as Such that is Suffering. Although the Seemingly Unpleasant Effects still arise, if we do not Cling to them as ours, and see their Impermanent Nature, our relationship to them Changes, and we loosen the Fetters a little, making Our Sufferings Lessen, if not Totally Disappear. One can not expect them to completely Disappear until one has wandered the Path for a very long time, and is about to Enter the Path of the Noble Ones. Until then though, we can lessen our Burdens and Prepare the Way for that Future Day of Awakening, by practicing the Contemplation of Impermanence, and Striving to See the Dhukkha and Non-Self Aspects of Nature.

Dharmathai Notes written by Ajarn Spencer Littlewood – Use, Sharing and Republication Permitted according to Creative Commons rules (Give Credits to the Author, and/or link to dharmathai.com).

No Ajahn Chah – Free PDF Ebook Download for Free Sharing of the Dhamma according to the Wishes of Ajahn Chah. – ‘No Ajahn Cha’Originally Published in Printed Format by Dhamma Garden Singapore, types and transliterated into PDF by Kritanut Wattana and Ajarn Spencer Littlewood.

The Venerable Ajahn Chah Speaks for the first time again on DharmaThai.Com – Exerpts of the Book “No Ajahn Chah – Reflections” Verses from the Chapter on Peace. 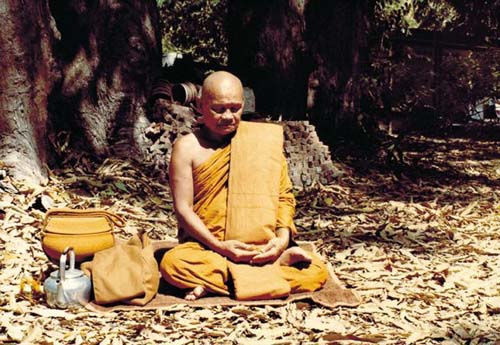 Once there was a Lay Person who asked Ajahn Chah, Who He Was?

Ajahn Chah, knowing that this Person would not be able to Understand Deep Dhammas, pointed to Himself and replied; “This, This is Ajahn Chah!“.

Another Time, Ajahn Chah was asked who He is by another Individual. But this person Ajahn Chah saw to be able to understand the Dhamma well, and so he answered; “Ajahn Chah? There is no such thing as Ajahn Chah“.

Ajahn Chah Answers; “What is Confusion? Well Peacefulness is the End of Confusion”.

Know what is Good and Bad, whether Travelling or Living in One Place. You can not find Peace on a Mountain, or in a Cave. You can even go to where the Buddha Attained Enlightenment, without getting Closer to the Truth. 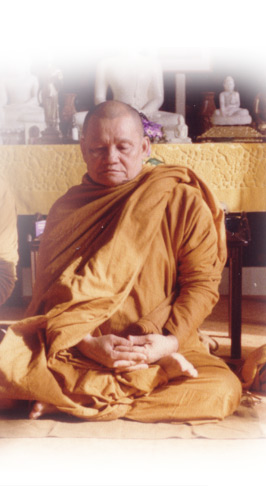 Looking Outside the Self, is to Compare and to Discriminate. You will not find Happiness that Way. Nor will You find Peace if You spend Your Time looking for the Perfect Person, or Teacher. The Buddha taught Us to Look at the Dhamma, the Truth, and not to look at other People.

Where is Peace to be Found?

Peace is Within Oneself to be Found in the Same Place as Agitation and Suffering. it is Not Found in a Forest or on a Hilltop. Nor is it Given by a Teacher. Where You Experience Suffering, You can also find Freedom from Suffering. Trying to Run Away from Suffering is Actually, to Run Towards It. 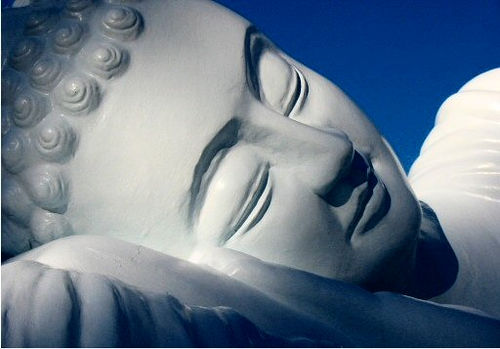